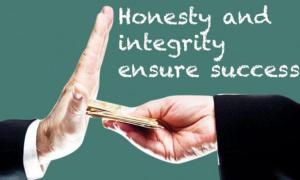 I’ve been puzzling (yet again!) over the usefulness of anti-corruption as an entry point for engagement by civil society, donors and other developmental champions. Always and everywhere, behaving ethically is surely crucial to meet the most important test of all — the “look oneself in the mirror every morning” test. The question for activists is not whether we should model ethical behavior — an obvious “yes” —  but what are the pros and cons of an anti-corruption ‘framing’.  I list below three analytically strong arguments against using anti-corruption as an entry point– but also one compelling argument for its use. It would be terrific if this post could get some fresh new conversation underway on the dilemma.

Here (to establish that I’m not coming at this as an apologist) is the argument ‘for’ focusing on anti-corruption. Impunity is corrosive. It can over time destroy a country’s entire development platform. In the absence of sustained vigilance, some political leaders might find themselves wading, step by incremental step, deeper and deeper into the mire of corruption – setting a tone at the top which progressively pervades layer after layer of a country’s institutions. The absence of a strong anti-corruption voice in society can help ‘enable’ this type of downward slide.

But here are the three arguments against leading with an ‘anti-corruption’ focus:

A few years ago, I began asking colleagues within the development community how one might tell the difference between those political and bureaucratic leaders who were doing what was necessary to achieve developmental goals in settings where formal institutions were weak – and those who had crossed over to the ‘dark side’ of impunity and predation. It took many months before I finally came across a colleague who (based on his many years of experience in an African country which had experienced both types of leadership) provided a compelling answer.  “It’s easy”, he said. “In the former case, the informal rules of the game are clear, and the leaders play by them. In the latter, the rules are not clear – and, whatever, they might be, they do not apply to the leaders themselves”.

Compelling, yes – but how can activists translate the above into a strategy which provides a ‘tripwire’ in the face of impunity but, at the same time, sustains a positive discourse for the development endeavor as a whole? Reflections appreciated – and more on this in subsequent posts….