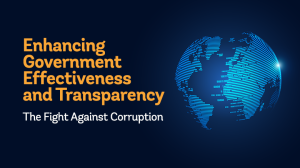 A new publication  from the World Bank offers a view of the past, present and future of work on anti-corruption. The vista left me feeling surprisingly hopeful.

‘Anti-corruption’ never has been my favorite topic; its discourse has, to my ears, often seemed  too self-righteous, potentially counterproductive in its polarizing, Manichean certainties.  But Enhancing Government Effectiveness and Transparency: The Fight Against Corruption, published by the Bank in September 2020 is different.

From the start, unlike  many anti-corruption dicta (some of which, as a one-time insider, I helped to write) the report foreswears any grand statement of what is to be done. Rather, it frames its purpose as:

There is a sense of sobriety, of sharing hard-won insights.  No quick fixes. No ‘best practice’ technocratic solutions ready to be parachuted in. There is recognition of the centrality of context:

“Political realities  constrain the menu of policy responses from which leaders may choose…… Technical solutions alone are insufficient to have an impact on corruption, nor can they be merely transplanted from one country context to another”

“Many high-profile anti-corruption strategies have proven to be ineffective and only give a veneer of government action…..Progress is not linear and reforms could suffer due to political setbacks and/or institutional weaknesses, yet even basic efforts could provide a foundation on which to build.”

‘Magic bullets’ from times past are given no special treatment:

“Pervasive institutional limitations raise questions as to whether the model of a stand-alone multi-functional anti-corruption agency is the right one…..”

“While many countries have asset and interest declaration systems, there is limited evidence of their effectiveness. Most AID systems have yet to live up to their potential.”

“Progress in the fight against corruption is not necessarily from the large government-wide announcements and initiatives that garner extensive press coverage, but from the more focused efforts and more subtle changes that governments and communities make that may go unobserved.”

Having thus cleared the air, the report directs attention to practical entry points for change, organized around  brief overviews and in-depth case studies for each of fifteen anti-corruption-related topics. Even though the authors explicitly foreswear the ambition to offer  a grand synthesis, there seemed (at least to this reader) to be an implicit  unifying thread – the idea that entry points emerge and expand  through creative interaction across multiple dimensions, with pride of place given to interactions  among sector-level initiatives, stakeholder engagement, and ‘govtech’.

“Unpacking sector-specific issues is crucial to diagnose the root causes of corruption in public services and design appropriate interventions. Even within a sector, a reform could be narrowly focused on rooting out a particular issue, such as bribery in surgery waiting lists, or adopt a multi-pronged approach to focus on the entire service.”

“Mobilizing citizens and stakeholders and strengthening their hand through greater project transparency and openness can build momentum, and change the political economy and cultural considerations that have allowed corrupt practices to happen.

“The broadening and deepening of global digitization of governments and citizens is changing the face of public sector governance and its impact on anti-corruption.”

If the ‘govtech’ approach is too-narrowly tech-oriented, the result could be little more than:

“mere window-dressing…..giving only a veneer of government action…..The traction of digital technologies in reducing fraud and corruption depends on institutional context. Any system will only be as good as the practices that complement it….. Impactful reforms usually require a combination of several layered or sequenced interventions.”

“Framing technology-supported reforms as a public services delivery agenda, rather than an anti-corruption crusade, may  be a more disarming approach in light of the existence of the vested interests benefiting from corruption.”

Two especially evocative cases illustrate how a sector-specific focus, multistakeholder engagement and govtech  can reinforce one another:

“EPM proactively makes itself accountable to citizens and shareholders through a series of transparency initiatives, digitization, and customer-engagement practices. Citizens in the community consider themselves to be the real owners of the company and look out for, and protect it, from interference that could be detrimental to its purpose, including a surveillance committee to observe and control the mayor’s decisions and actions that could negatively affect the company.”

“In 2018, in an annual Citizen Perception Survey,  88% of the Medellin population had a favorable image of EPM…. In 2019, EPM created a new communication channel called ‘Transparent Contact’ where citizens could report acts of fraud and corruption involving officials and contractors through a web page, a free hotline, email or fax.”

The National Health System of Ukraine, established in early 2018:

“An Affordable Medicines Program provided patients with information about which medicines were covered by the NHSU, and which were not. This increased overall access to medicines and led to a huge reduction in patient co-payments. In July 2019, over four million electronic prescriptions were filled under the NHSU reimbursement program, and over 3 million e-prescriptions issued by pharmacies were reimbursed.”

A focus on the practical is a welcome corrective to hubris.  But, in a world hungry for hope, is it enough? The report’s answer is clear:

“The evidence is overwhelming  that sector specific interventions alone are generally insufficient. Corruption at the sectoral level may flourish because of broader social norms and a governance ecosystem that either tolerates or encourages corruption.”

Though it is not the central focus, there are some tantalizing hints in the report as to what  might  be a mode of engagement capable of making the whole greater than the sum of its parts:

“Through a sustained and broad-based movement, country examples demonstrate that change can happen at both the project and society level…. What is needed above all, is the commitment of all parties to engage proactively in the fight against corruption through collaboration, innovation and mutual trust”

More from me some other time on a deliberative, coalition-building, norm-strengthening approach to governance work.

How did the World Bank’s October 2020 anti-corruption report manage to avoid the chronic disease of descent into cliché that all-too-often afflicts reports of this kind?

In my experience, the best of the World Bank is to be found in engaging individually with its staff –  most of those who work on governance bring deep reservoirs of experience, thoughtfulness, professionalism and commitment to their efforts. In recent years, governance practitioners have been sobered, humbled.  Paradoxically, this may have opened up space. Perhaps the loss of center stage has made possible a shift in the balance between wheat and chaff.  As the great singer-songwriter Leonard Cohen put it in his song, Anthem:

Ring the bells that still can ring.
Forget your perfect offering.
There is a crack, a crack in everything.
That’s how the light gets in.

My congratulations and appreciation to all involved in this fresh, hope-evoking publication.