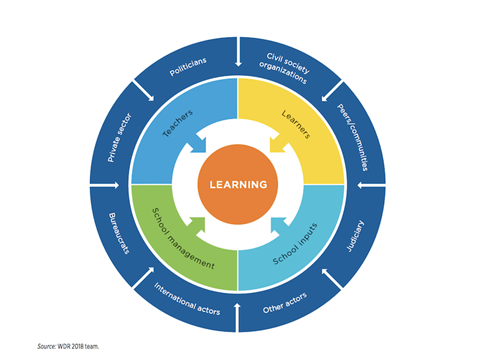 In  a sector where a proliferation of research seemingly has contributed at least as much to confusion as to progress, the 2018 World Development Report (WDR), Learning to Realize Education’s Promise  sheds new light, and points towards fresh, hopeful pathways forward. It is a landmark contribution.

“Education for all” was the seductive promise of the millennium. The task seemed so straightforward: provide the resources to get children into school; teach; the child learns; development accelerates. Indeed, as the WDR details, there have been extraordinary gains in access. In 1970, gross school enrolment of the relevant age cohort was 47% in South Asia and 68% in sub-Saharan Africa; by 2010 both figures exceeded 100%. (p.59)

Yet in all too many places, the promise has not been realized. Globally, “125 million children are not acquiring functional literacy or numeracy, even after spending at least four years in school…. Across 51 countries, only about half of women who completed grade 6 (but no higher) could read a single sentence”. (pp. 71; 73)

The determinants of educational outcomes

There is no shortage of explanations (and implicit solutions) as to where the problem lies. Here is a partial list: teacher training; child nutrition; parental engagement; textbook availability; school management; the quality of the public education bureaucracy; too few (or too many) private schools; infrastructural quality; incentives and penalties for performance; early childhood learning opportunities; the degree of centralization of the system (some making the case for more centralization, others for less); the role of testing and measurement (sometimes said to be too much, sometimes too little)  pedagogical strategies; the use of information technology (again: sometimes said to be too much sometimes too little); teachers unions; quality of school inspections; recruitment politics; the quality of school-level leadership;  parental (il-)literacy; community influences; classroom size etc. etc….

The trouble, as Lant Pritchett puts it, is that:

The aphorism that ‘if you have a hammer you see nails everywhere” fits development practice well – and  seems to apply to the education sector with special force.  (e.g. here, here and here).  What we need is a way through this seeming morass that can  structure and cut through the complexity, help sort what is central from what is peripheral, help distinguish between cause and symptom.  This the 2018 WDR does brilliantly. (Note: A case could be made that this review also is an example of the hammer/nails syndrome: the focus of my research is on the governance dimensions of education,  a central theme of the WDR; I had some interactions with the WDR team; the document cites my work.  In mitigation: what I sought from the document, and believe I found, was a framework that integrates effectively the governance and non-governance dimensions of education systems.)

The WDR organizes its discussion around the deceptively simple framework laid out in the three-concentric-circles figure at the beginning of this review. Learning, the ‘bullseye’ at the center of the figure, is the target.

Analyzing the availability and quality of each of  these school-level ingredients, identifying  weaknesses,  suggesting ways in which provision might be enhanced, and experimenting with new school-level approaches to teaching, learning and governance – these are  the stuff of technocratic analysis of education systems everywhere.  Such work is necessary; it provides the knowledge base for continuing improvement of education practice.  But it also is limited.

For one thing, insofar as there are complementarities among the ingredients, targeted efforts to address one specific set of shortfalls may not achieve the expected results: even as one ‘binding constraint’ to learning is alleviated, another might constrain the system. This is a reason why interventions that work in one setting (where the relevant complementary inputs are available) will fail in places that lack some of the complementary parts.

There is, though, a more fundamental limitation of  approaches that aim to improve educational outcomes by focusing on the immediate school-level ingredients. As the outer circle in the figure suggests, technocratic decisions are not made in a vacuum – they are embedded within a much more complex, and much more political system of  actors and their incentives.

Education  is a classic example of a complex, interdependent system, one where each of the various actors bases their actions on expectations of how  other actors  behave. The incentives and behaviors of these actors could be contradictory or  mutually  reinforcing.  When the expectations of the players are aligned, a complex system (education or otherwise) can be described  as coherent  – in the sense that each of the players base their actions on accurate perceptions of how the other stakeholders in the system are likely to behave. Expectations and the de facto rules of the game, are aligned. But aligned towards what purpose?

The desirable answer, as the bullseye at the center of the concentric circles diagram signals, is aligned towards learning.  That, however, is not the only feasible outcome.

As voluminous comparative analyses have underscored (see here for example), there is wide diversity across countries in how politics and bureaucracies interact, and thus in the behavior of public bureaucracies.  Rather than being aligned towards learning,   education systems could be aligned around patronage –  or,  in part as a way of managing patronage pressures without falling foul of the law, around  a pre-occupation with ‘process compliance’.  As the WDR puts it:

“Many systems are stuck in low-learning traps.  These traps bind together key stakeholders through informal contracts that prioritize other  goals such as civil service employment, corporate profits or reelection, perpetuating the low-accountability equilibrium….. In low-level traps actors such as bureaucrats and teachers lack either the incentives or the support to focus on learning…. In an environment of uncertainty, low social trust, and risk aversion it is often in the interest of each to maintain the status quo – even if society, and many of these actors, would be better off if they could shift to a high-quality equilibrium.” (WDR p. 15)

In the figure below, I expand on the WDR diagram to illustrate how alignment towards  non-learning goals might influence the motivations and behaviors of some of the key actors in an education system. 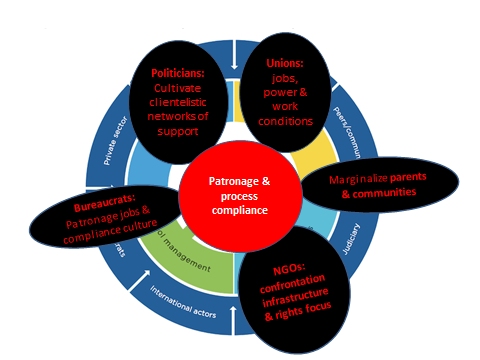 How does insight into the (mis-) alignment of  education systems translate into practical guidance for change?  One classic debate concerns the relative merits of  ‘big-bang’ and more incrementalist approaches. Perhaps surprisingly, given the World Bank’s reputation as the champion of all things ‘best practice’, the WDR is unequivocal in its rejection of  a ‘best practices’ (‘just do it’) approach to reform.

The reason is underscored in the  further  elaboration below (taken from the WDR)  of the concentric circles approach.  As the figure below underscores, the many actors which shape a country’s education system  are enmeshed in a complex web of interdependence – so  the law of unintended consequences looms large, with efforts to push through change in one part of the system likely will produce a reaction in others.  Thus the WDR concludes that:

“A gradual, negotiated approach to reform may work better than confrontation. Where coalitions of system actors foster collaboration among shared goals, reforms are more likely to succeed…. Even if evidence shows that the reforms improve learning, their sustainability is at risk when they are misunderstood or unpopular among system actors.” (p. 204).

The WDR highlights Andrews, Pritchett and Woolcock’s celebrated problem-driven iterative adaptation (PDIA) approach to incremental change. As a champion of working with the grain, I am hardly one to argue against incrementalism.  Indeed, as the WDR details (and is evident from even casual observation in almost any country) the education sector is rife with experimentation. Even so,  there is more to be said than ‘just PDIA it’.

Consider, again, the role of context – specifically how  broader political and bureaucratic contexts shape the potential and limits of incremental approaches. Using the WDRs coherence-alignment framework, three distinct contexts can be distinguished:

In sum, unless an education system already is oriented towards learning, there are limits to what can be achieved through incremental approaches. In some contexts, they can  yield worthwhile but limited gains –  but these will add up to be less than the cumulative gains which incrementalism’s protagonists (the present author included) might have hoped.  A dysfunctional status quo generally  persists, not simply because of inertia  but because it is underpinned by powerful interests. If a stuck system is to be transformed, something more than ‘cumulative incrementalism’ will be needed.

To engage difficult contexts, the WDR advocates for “mobilizing support and building coalitions to improve learning”,  including by explicit efforts to incorporate into the process “groups that are not involved in agenda-setting or that do not engage with others.” (p.203) As part of such efforts (as the WDR also underscores), investing in better information on learning outcomes  can make a key contribution– not only as a tool for more effective technocratic decision-making by education sector professionals, but as an aspect of advocacy, with transparent reporting on school-by-school outcomes  signaling to politicians, voters, parents and communities both  the limitations of the status quo, and what might be achievable.

Orchestrating interests and leveraging information are powerful tools – but what potentially makes them transformative is not so much coalition-building per se, but their broader impact on a society’s ideas as to how an education system should function. The role of ideas in shaping action is a theme which  was not explicitly explored in 2018, but was central to the 2015 WDR, Mind, Society and Behavior.  A shift from patronage/process compliance to learning is as at least as much a shift in ideas about the world of schooling and ones place in it as it is a reconfiguration of interests.

‘Education for all’ was a powerful example of a transformative idea. But for all of the gains which it helped to catalyze, it turns out to be an unhelpful idea vis-à-vis  the frontier challenge of improving educational outcomes.  It induces a  narrow focus on top-down approaches to implementation, aligning action towards input expansion and process compliance, not towards doing what it takes to improve quality.

Consider, by contrast,  the implications for action were education stakeholders  to embrace the idea of unambiguous commitment to a learning-oriented education system:

This, perhaps is the central implicit message of the 2018 WDR – that going forward, the crucial transformative idea is no longer the  ‘education for all’ vision of the MDGs, but  a vision of pro-active engagement by all stakeholders; a vision, one might say, of ‘ALL FOR EDUCATION!